Kasama is a word in Tagalog that has many meanings, depending on how the word is used in a sentence. As a noun, kasama means "companion, housemate, associate". As a verb, it means "to be together". As an adjective, kasama means "together with, accompanied with, staying with".

You can see kasama used in a very technical sense, like when describing charging cord that is included with your phone or electronic device. 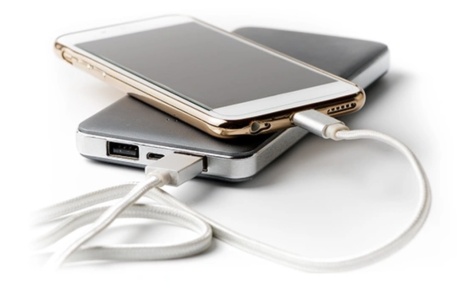 You can also see kasama in a more meaningful context, which is what I'd like to describe to you.

I've heard it said that your neighbor is the one who crosses the road for you. In the parable of the Samaritan and the man who was left for dead, we see that the other two who noticed the man and his condition actually walked on the other side of the road to avoid the man who was desperate for help. But the Samaritan drew near to the man and not only took note of his condition, but invested his time and money to help the man and to see that he was restored to full health.

This is true kasama: together with, accompanied with, staying with. 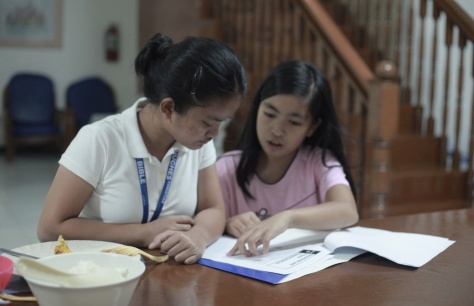 At CSC we strive to be together rather than apart. We have learned that being together helps build community. We can learn from each other and support one another. We can celebrate with and mourn with one another.

This is my hope for us all, that we would model that adjective form of kasama to whomever is in our path today. Let us not see that person as an obstacle or someone to avoid, but as an encounter and someone we are called to care for.

The Scent of Joy

Emily Dickinson once wrote that "there is no Frigate like a book." In her poem, she described how a book could ferry us to faraway lands or unfathomable seas. That poem has a lulling melody yet a compelling voice. In counseling, we have different frigates that have helped us guide the children in exploring their faraway lands (future and goals) and unfathomable seas (past and trauma). Talk, art, and music have been a great help for several years in dealing with children in counseling. This year, the mothership was finally realized.

On May 20, the counseling department finally moved to its new space, the Alimyon Hall. Alimyon is a Cebuano word for scent/aroma. Although we use scents/aromas as an aid in counseling, this is not the reason why the space is named Alimyon. We believe that emotions put the colors to our thoughts; behavior is the scent of our emotions—a scent that can be seen rather than smelled. In this new space, play has been the frigate that helps us in dealing with the children. Toys, a lot of them, like sand trays, art materials, and musical instruments are present in Alimyon. These have evoked a lot of emotions from the children.

Joy is the dominant scent here as younger residents dive into their world as they start to play. They become attuned to the present, focusing on the story of their play. For older residents, play allows them to reconnect with their inner child with the help of sand trays. Through their play, we can have a glimpse of what they've been through; where they are going; and what they are hoping for. With smiles on their faces, excitement in their voice, and the calmness of their hearts radiate the scent of joy. 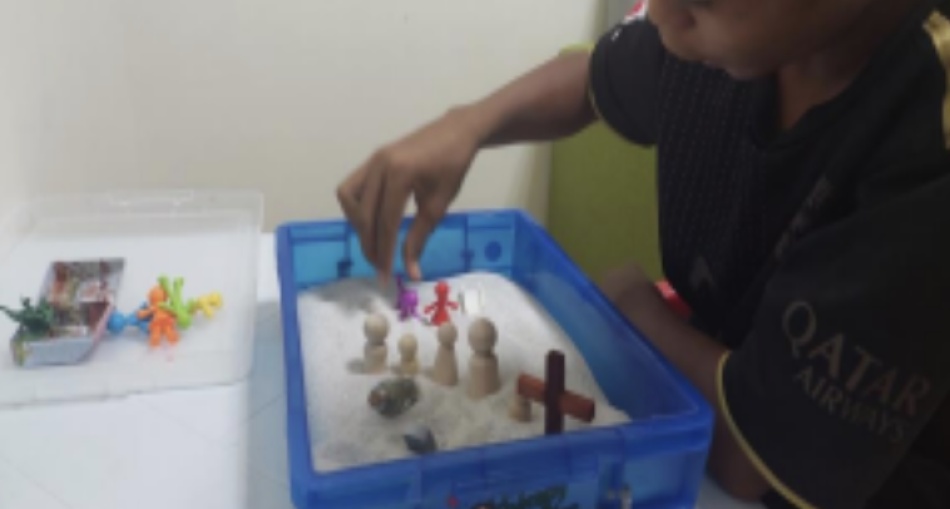 Space and Time to Grow

We are all aware that most living things on our planet need food, water, light, the right temperature, and air to survive. Moreover, they require extensive time and ample space to develop entirely.

One of my former students once passionately shared his dream of becoming a farmer during our morning meeting routine. He even emphasized that he wanted to own the land he would farm. Whenever asked what he wanted to become in the future, he consistently responded: that he wanted to own land he could farm. I was glad to learn that, despite his age, he is highly confident of the dream he wants to achieve in the future and shared with the class the reasons why. It was heart-warming to hear from a student who once struggled to control his emotions in class before, now has made a positive transition with the help of the significant people in his life.

Their home economics and livelihood education class covered gardening during the last quarter of the academic year 2021-2022. As the teacher planned the activity with the students, they expressed considerable interest and showed their eagerness to participate. After weeks of in-depth discussion on the fundamentals of gardening and identifying the necessary tools, it was time to put the lessons learned into practice. The class decided to grow eggplants and agreed that if it produced some fruits several months later, we would have to find a recipe that needed eggplant as its main ingredient. 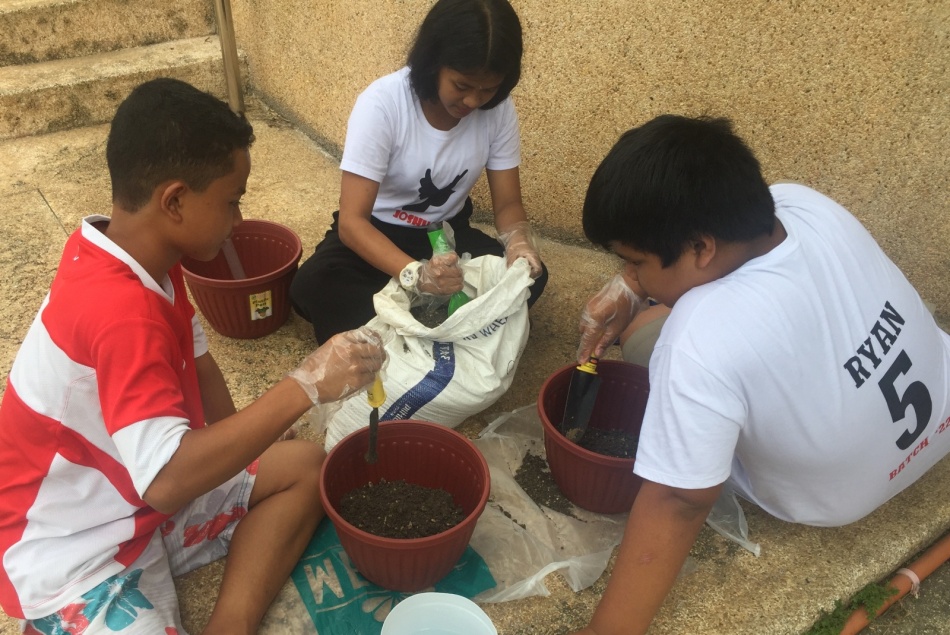 After ten days of care for each of their pot, the seeds began to sprout. It was a success! 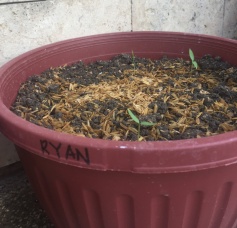 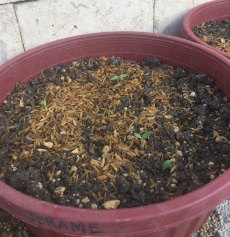 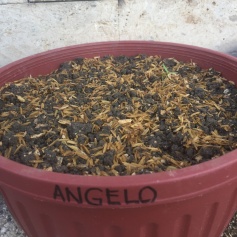 What stood out to me the most as we talked about the lessons they had learned from the gardening activity was that one shared a realization that learning can be enjoyably done both inside and outside the four walls of the classroom.

After six months, my students excitedly shared that the plants were already bearing fruits. They said they had taken good care of their plants during the summer. 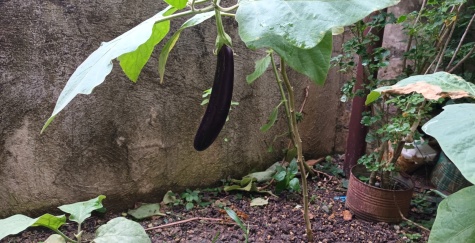 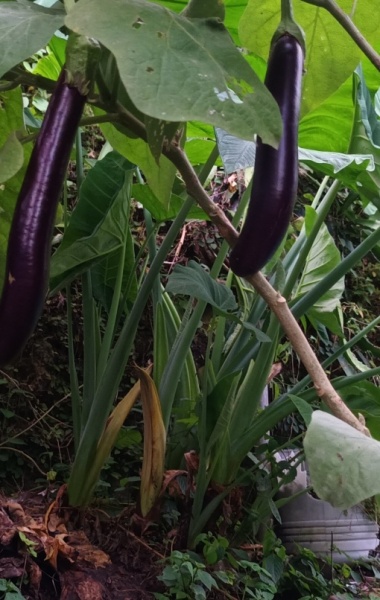 For this school year 2022-2023, two of my former students are still my current students, and the other has moved to high school. That means he was already in a different class. Nonetheless, we invited him to participate in the agreed cooking activity, and he gladly accepted.

So, on September 28, 2022, after obtaining permission to hold the activity at the shelter, we decided to cook "Crispy Eggplant Fries" and "Eggplant Burger Steak." 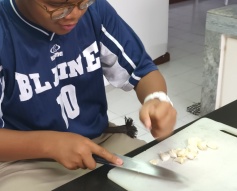 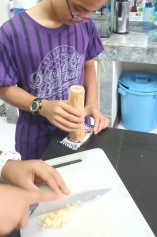 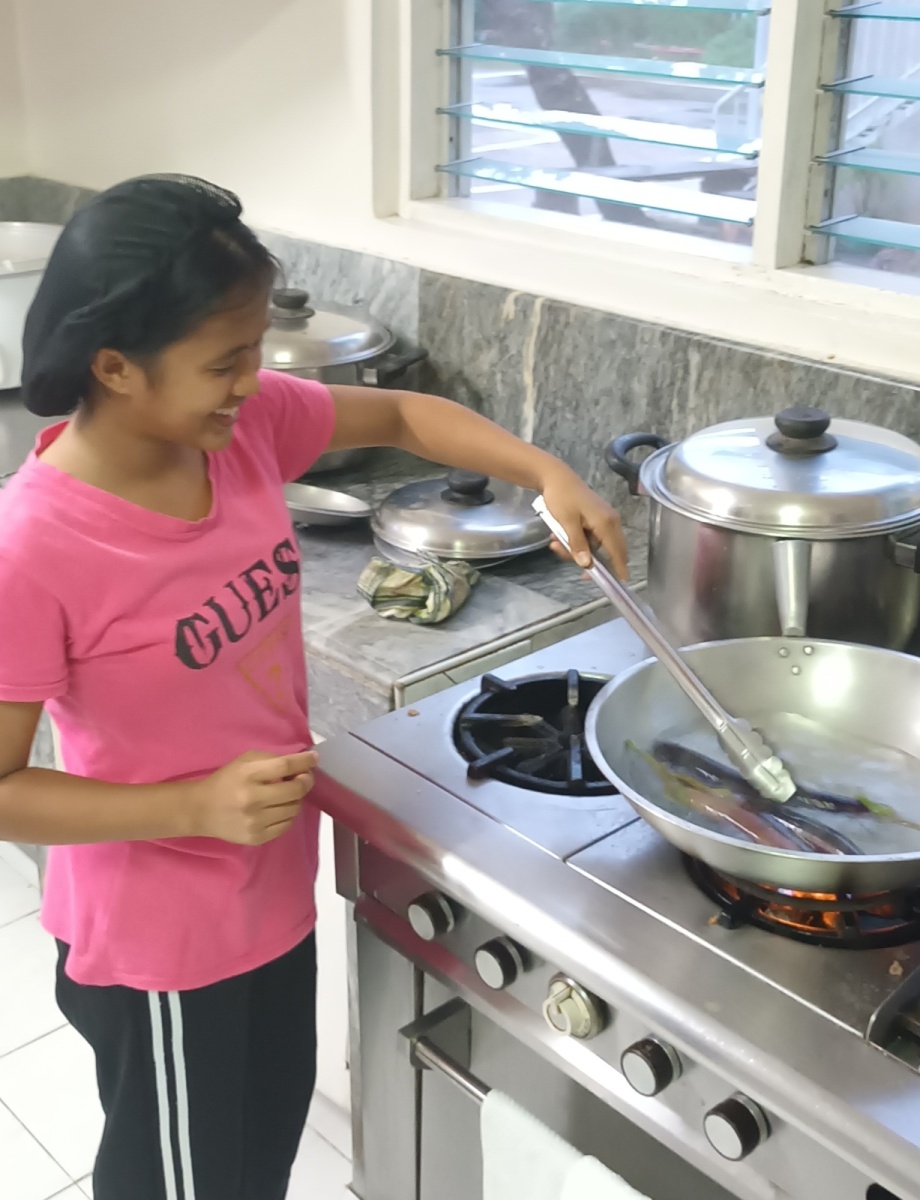 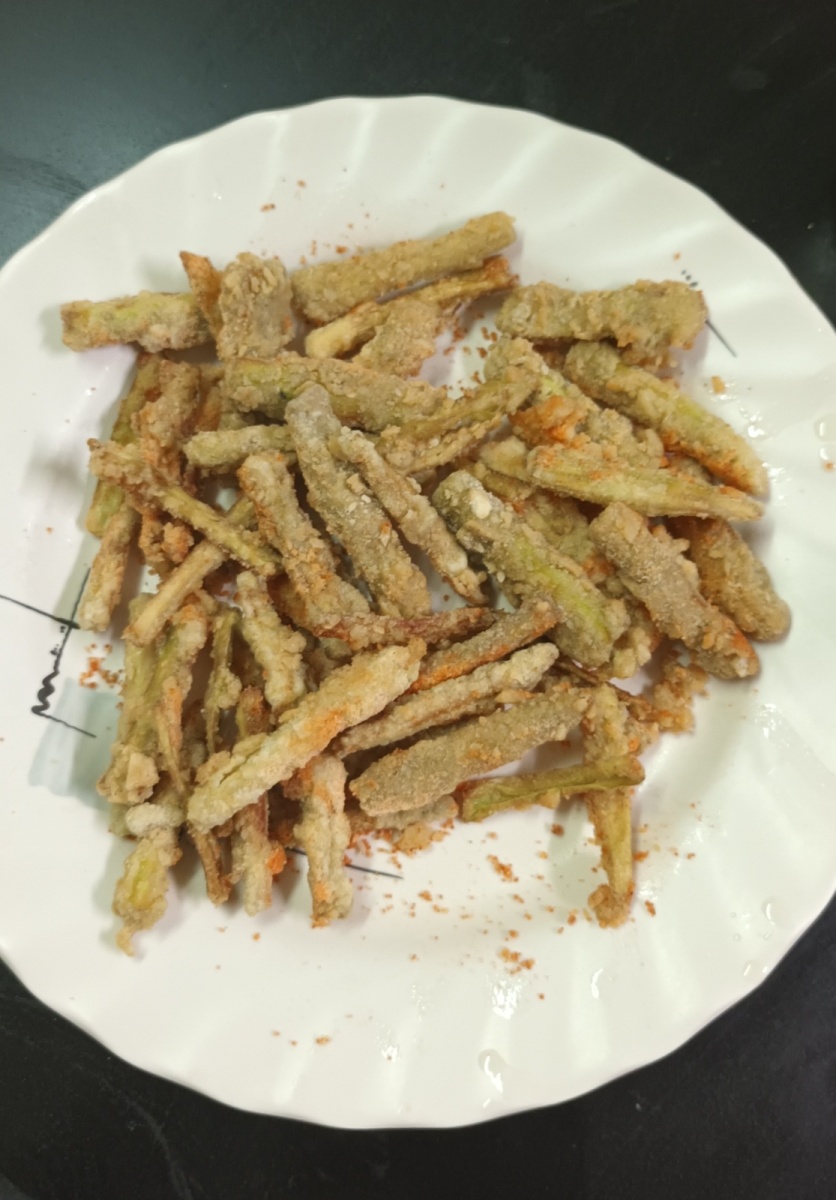 One of the activity's best moments was observing how they accomplished the task, how well they worked together, and how committed they were to their education. I could tell they were delighted to have the eggplants cooked and tasted. The class loved it and expressed interest in giving the recipe to their house parents and designated cook so they could prepare it at home and serve it to the other children. This is an incredibly significant experience for them as kids, and it's great to know that they learn the concept of planting so they may grow their food in the future, whether it's for their consumption or business purposes.

As living things, plants require ample space and time to grow, in addition to sunlight, the right temperature, moisture, air, and nutrients. The same is true with our kids, who face challenges and overwhelming emotions. They deserve not only our love, support, and guidance but also ample time and space for themselves to maximize their full potential and develop the abilities that God has given them.

Seeing the Benefits of Inclusive Education

"When Jesus saw this, he was indignant. He said to them, "Let the little children come to me, and do not hinder them, for the kingdom of God belongs to such as these." – Mark 10:14

Every child is special in the eyes of God. It is amazing to think that God spends so much time making each of us so unique. It's been a month since classes have started. The children were ecstatic to be returning to school. One great thing about CCHS is the ability to adapt to the new normal in teaching the kids. Another great thing about CCHS is that it practices inclusive education, where students with special needs are in the same classroom as mainstream students and they all receive equal learning opportunities.

Two students in partciular have greatly benefited from this inclusive education. This school year, they have joined the other four grade-two learners. We decided to move them up and join an appropriate group based on their age and a group that could greatly help them in achieving their goals and unlocking their God-given potential. Their first day in August 2022 was full of enthusiasm upon coming to school. They were delighted to see the school and were fascinated with the facilities since it was their first time to be back at school after two years of schooling at the shelter (CSC) due to the pandemic.

These two precious kids have shown their talents and skills in different areas. Student A loves to do math activities. He does well in answering some math problems, like joining two groups and counting them all independently. At times, he answers math problems with the help of his classmates and by using some math tools like counters, cubes, and number paths. On the other hand, student B loves to read books. He is able to read decodable books independently and loves to sing upbeat songs.

It is wonderful to see that despite their challenges, they were able to cope up gradually with the assistance of their concerned classmates. At times, it's a big challenge for them to stay focused on their tasks, but I am thankful to God for making those supportive shadow angels (their peers) as an instrument for their success. Their willingness to reach out to their classmates' needs is absolutely amazing. Their success is also possible because of your undying support for our school. Thank you so much for your contributions to this ministry. 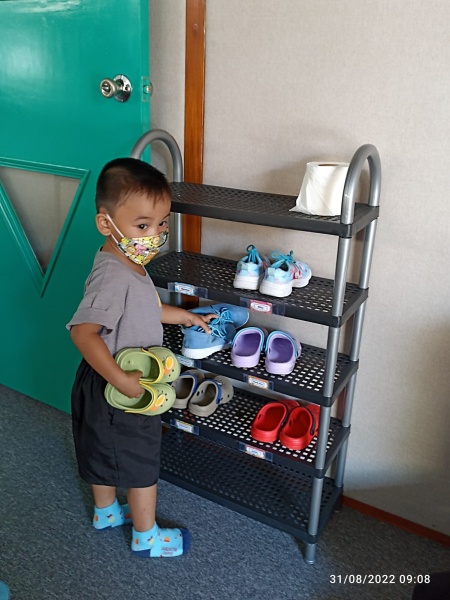 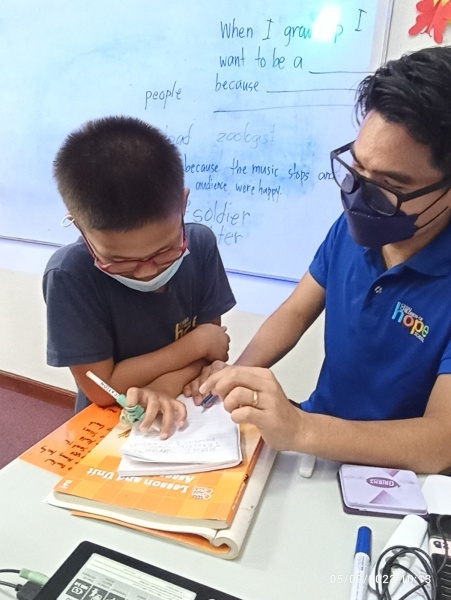 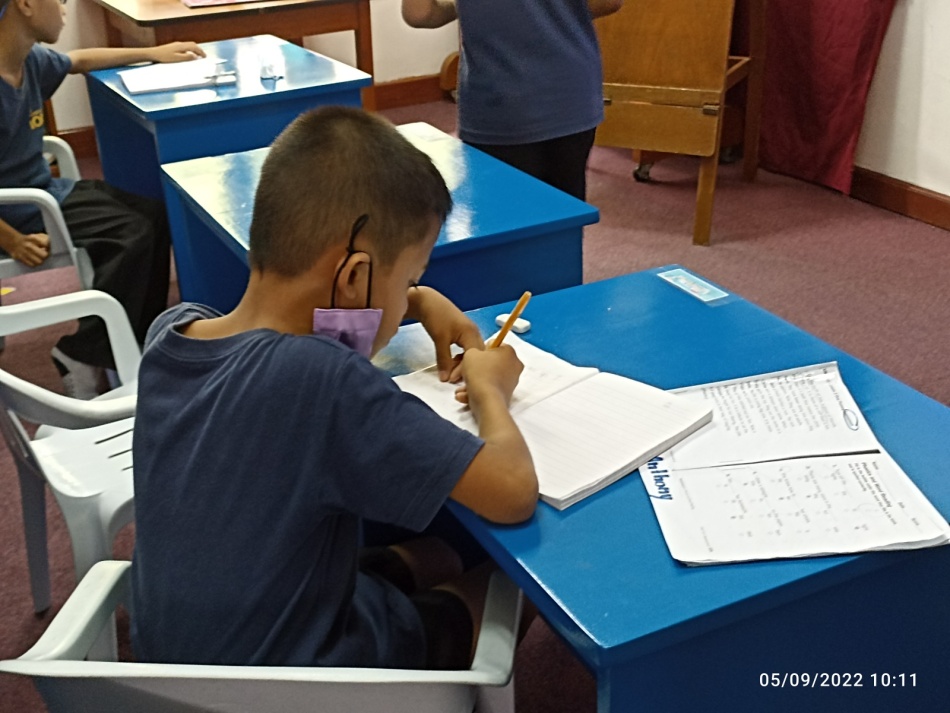 This is the day that the LORD has made; let us rejoice and be glad in it. Psalm 118:24 (English Standard Version)

Praise the Lord for the first week of school. It is an exciting week for the CCHS family. Teachers and students were waiting for this day to come. We believe God ordained this day to mark a fresh beginning. Here we are opening our new school year while transitioning to our new normal. Upon entering the school we have to wear our face masks, step on our new foot bath, have our temperatures taken then sanitize our hands. Students enter and exit their classroom following the arrows. 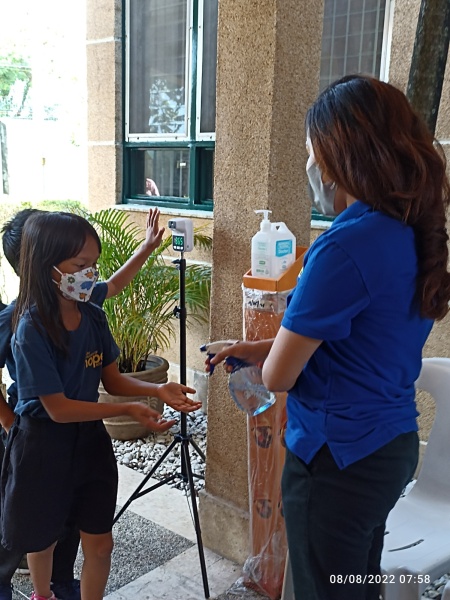 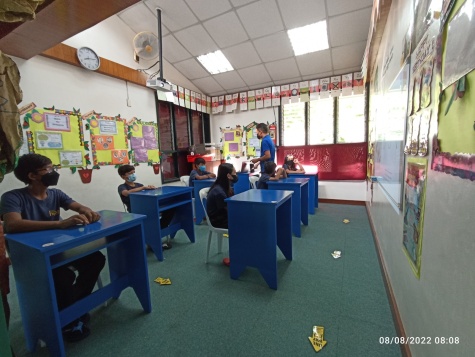 We have a new clinic at CCHS! Over the summer we set up our clinic. We are thankful for the efforts done by the team who made this clinic possible. From facilities who built this room initially during lockdown for quarantined employees to our medical staff and the office staff that helped us placed medical equipment and supplies. As mandated by the Department of Education, students, teaching and other personnel are strictly prohibited from eating together while facing one another. Eating shall be done in a manner where all individuals face in one direction and do not talk while their masks are off. CCHS made changes on the setting up the snack room this school year to follow that instruction. 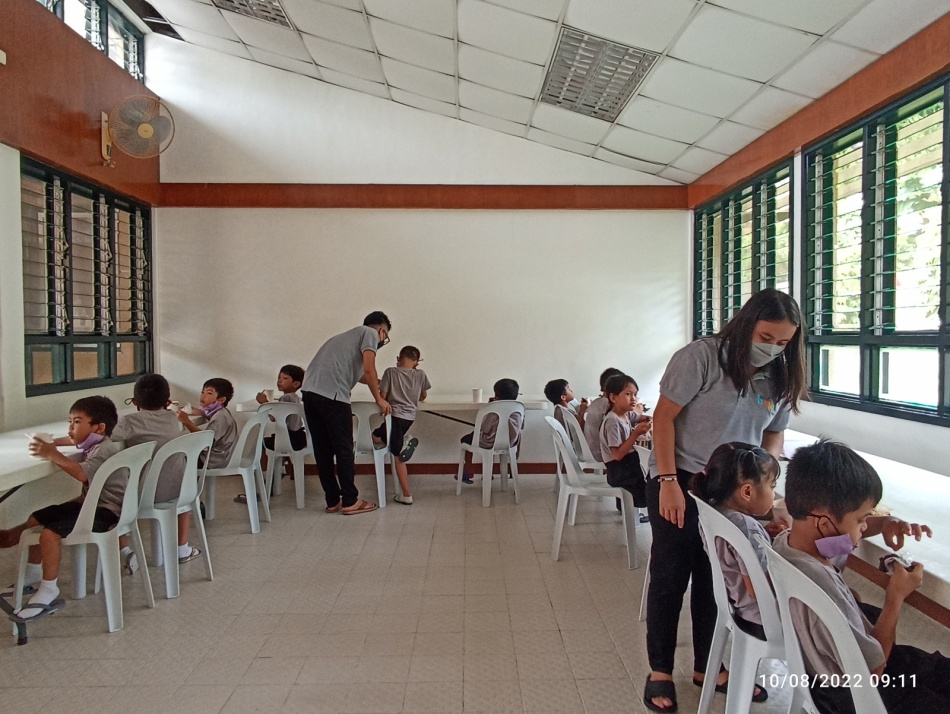 Here are some of the students' comments on being back at CCHS:
Maribel – CCHS is great! I like to borrow books in the library, eat with my classmates in the snack room, and to be with my teachers.
Mias – I am happy to be back at CCHS. I want to learn new things from all the subjects. I like to be with my teacher in the classroom because our classroom is Awesome!
Ryan – I am happy to learn new things and meet teacher Merce. I am excited to be in the library too.
John Mark – I am happy to be at CCHS. I enjoy learning new things. I am excited to be with teacher Alfie, play during Physical Education and play musical instrument.
Ford – I am happy at CCHS because I can write my name, draw a horse, answer in our workbook, eat snack, and drink water. Our classroom has toys and tools and I like it.

As a school, we are looking forward to meaningful and fruitful days ahead. We would like to encourage you to journey with us for school year 2022-2023.