A Great Day In Science

In our science curriculum, before we formally discuss the main topic, students participate in a science investigation activity. Our third main topic dealt with the different inquiry skills scientists use to help them gather information.

To make it more exciting for my students and to give them something to look forward to, I announced to my class two days before the actual "activity day" that we would be doing a science investigation.

On that day, as I entered in the classroom, I found my students patiently waiting and I could sense that they were all excited for the science activity. The activity was entitled "Measure Up!" Measuring is one of the inquiry skills used by scientists and the objective of this activity was for students to be able to practice using a ruler or a tape measure to find the length and compare objects by length. 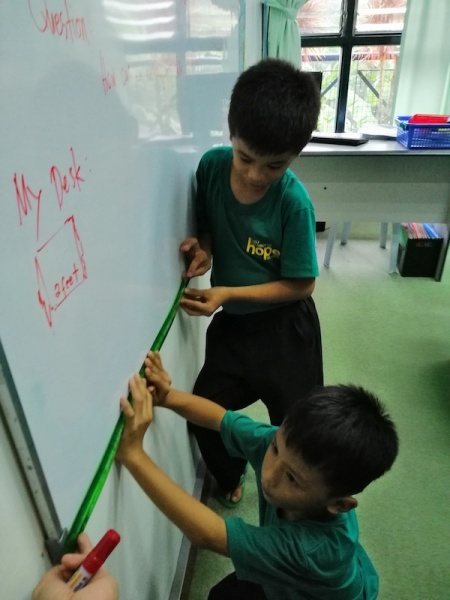 Collaborative learning was being developed and practiced by each student as they took turns in performing the science activity. The most surprising and rewarding part for me was when they confidently shared their results. Group one shared that the book measured 1 foot and concluded that it was shorter than the desk. The desk measured 2 feet. The bookshelf was the longest with a measurement of almost 6 feet.

Another inquiry skill that they used during the activity was communication. In communicating, students needed to record their results through writing and drawing. At the end of the investigation they discovered that the inquiry skill "measure" helped them find and compare the lengths of objects.

After the excitement from this activity I am more motivated to plan for other activities that help the students become more independent (and excited!) in their learning.