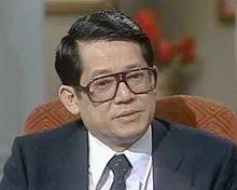 death of Senator Benigno "Ninoy" Aquino Jr. Senator Aquino and his wife, Corazon, were major contributors to modern Philippine democracy.
In 1972, the Philippines was placed under martial law by President Ferdinand Marcos. During this time, any person who publicly opposed Marcos was imprisoned by the military, and many public institutions were closed down. The military committed human rights abuses and the Philippine economy suffered massive losses.

Senator Aquino was a vocal opponent of Marcos and was consequently imprisoned. In 1980, Aquino suffered a heart attack and was allowed to move to the United States to receive medical treatment. While in the U.S. he continued to advocate for the Philippine people's freedom.

To challenge Marcos in the 1984 elections, Aquino decided to return to the Philippines in August of 1983. He knew that it could lead to his death. On the 21st of the month he landed in Manila where he was assassinated, many believe, under the orders of Marcos. It was this event that led to the eventual downfall of Marcos and the presidency of Aquino's wife, Corazon. Since that time their son, Benigno Jr. served a term as President of the Philippines, continuing the influence of the family in Philippine politics.

Truly, Benigno Aquino came along at the right time in the right place and made a big difference for this country. It is hard to imagine where the Philippines would be today without his contribution to the nation through his dedication and heroism.

I am aware of the role that individuals have made throughout CSC's history that have helped move us along, overcome hurdles and break new ground as a ministry. Some of these folks were like shooting stars, flashing bright for a time and then moving on to something else. Others gave us steady light that lasted for years.

- Harry and Marlene Schmidt came along in 1991 to build our Shelter homes in Banawa. They hadn't known anything about CSC until a friend shared the ministry with them at church one Sunday. The rest is history, and our beautiful facilities are the result of the Schmidt's incredible gift. I also think about the man who told them about us and the huge role he played in our history just by sharing.

- Many people came here for a short term assignment, to help out when we were short staffed. They gave of their time and talent to meet a pressing need for leadership here in Cebu, if even for a few months or a couple years.

- Some were staff members or taught in our school. Some had specific areas of expertise that they shared with our staff or our children like curriculum planning, speech therapy, IT, organizational development, administration or media expertise. These people produced videos, gave seminars and workshops, helped us formulate policies, offered encouragement and brought over materials that made us a better organization.

- Some friends, led by the Holy Spirit, made significant contributions that helped us at just the right time, when CSC was in need of a shot in the arm financially. Others have been steady and faithful, helping provide a bedrock of support on which we have built this ministry.

Like the Philippines, CSC has had many heroes who made us what we are today. People chose to give of their time, talent and treasure to make this a better place for children who need us so badly. Without them we would not be here today.