Giving generously and with a cheerful heart

The Christmas decorations are up and holiday tunes can be heard wherever you go!  It is almost Christmas, only 15 days away!  One of my absolute favorite CSC Christmas events is Junel's box.  Maybe you have already heard the story, but for those of you who haven't...

Junel used to live at CSC.  His generous spirit was his legacy and it inspired a wonderful CSC tradition.  Before coming to CSC, Junel was not treated very well in his previous home.  He was not allowed to eat with the rest of the members of his household and he was only able to eat if there was food left over.  When he came to CSC, he expected it to be much the same.  When it was mealtime, he went and sat in a corner instead of in a chair at the table, where all of the other children were.  He needed reminders that he was just as special and loved just as much as the other CSC children.

Junel's most prized possession seemed to be a small film canister with a few coins in it.  He loved to shake the canister to hear the coins jingle and he did so frequently!  That noise signaled his caregivers of his presence and it became part of the background noise in the home.  It was so much a part of the din that one day when it was not heard, the caregivers became concerned.  "Where is Junel?!  He should be upstairs!  Everyone is home from school!"  The caregivers rushed upstairs and sure enough he was there, and so was his canister, but it no longer made any noise.  It was empty.

In school that day, Junel's teacher had told the story of children on another island not having any slippers to wear on their feet.  He was so moved and compelled to help them that he gave all of his money, every last coin, each "noise-maker" he had.

Sacrifice.  Giving everything you have.  Giving what you cherish the most.  That is truly what this season is all about.

"For God loved the world so much that he gave his one and only Son, so that everyone who believes in him will not perish but have eternal life.  God sent his Son into the world not to judge the world, but to save the world through him."   John 3:16-17

Every year at this time, all of CSC's children hear the story of Junel.  For some of them they have heard it before, but for many, it is a story they are hearing for the first time.  For children new to CSC, they are not so far away from the life they lived before.  They can still remember begging on the street, or when their stomach hurt so much because it had been so long since they had eaten.  They have vivid memories of being in need.  The kids hear the story of Junel and then they hear of a family in their community that needs help.  They see pictures of the family and the home.  Maybe they see themselves.  The kids are then told they have the opportunity to give money from their allowance to help that family this Christmas.  The contributions will be used to buy food, and other household items to meet the needs of the family.  The family this year needs a home so if enough funds are raised, building materials could be purchased.

Every year, I am astounded at the generosity of our children.  So many of them, when told how much money is in their bank and asked how much they would like to give say, "Tanan."  Meaning everything.  They will give it all.  And they do so with big smiles on their face.

For they were once in need and now they can help others.  'Tis the season, indeed.  Merry Christmas! 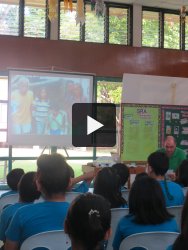