The students at the Children of Hope School always amaze me.  Primary instruction is given in English, a second language for them. Learning a second language is not easy. The English language is one of the most difficult languages to learn because of the multiple pronunciations for words, rules, and many exceptions to the rules. I admire these students for their perseverance and courage in the classroom as they learn English.

In our class, we have a morning routine. We gather our materials, pray, say “Good morning!” to one another, occasionally do a few stretches to calm our bodies down for class (including one of their favorite stretches called “warrior pose”), and do an activity that focuses on developing the students’ oral language in English. As a teacher, I will often give a word and ask one of the students to use this word in a sentence. Just the other day, we were doing this activity, and I asked the class if anyone could use the word “oppose” in a sentence. One student (pictured below) raised his hand with confidence. He was sure that his sentence would be correct.  With excitement in his voice, he said, “I do a warrior pose!” He had heard “a pose” instead of the word “oppose”.  It was a funny moment that allowed for further learning. By the time I asked the students to use a different word in a sentence, his hand was raised with just as much excitement.  He does not give up when he makes a mistake; he faces each new challenge with enthusiasm. 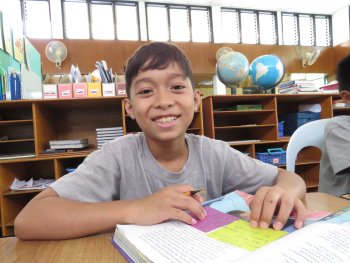