A Night of Music

This past Monday some of our kids got to experience a music event at CSC.  As I have mentioned in previous posts, for the past 4 months I have been teaching private voice and piano lessons to 8 talented CSC kids.  All of their hard work culminated into a special music recital.  For the past month or so, the 8 students had been working hard to make their 2-3 songs performance ready. I had been working equally as hard to prepare the setting for what I believed would be a once-in-a-lifetime experience for some of them.

For the voice students (there are 6), Disney and Broadway songs have been the focus in our lessons.  Some of the songs performed included:  Part of your world - The Little Mermaid, Consider Yourself - Oliver,  I Could Have Danced All Night - My Fair Lady, Colors of the Wind - Pocahontas, Do Re Mi - The Sound of Music, and Wishing You Were Somehow Here Again - Phantom of the Opera.  As you can see, we had quite the selection! Considering the fact that most of their pieces were very theatrical songs, I decided that I would gather costumes for EACH of their songs. I really wanted the kids to have the chance to get in character, and perform in a more dramatic and theatrical way. In all honesty, the costumes actually helped them become better performers, because it helped them use better facial expressions and actions, so as to match their costumes.

The piano students (2 of them) performed a mix of classical and contemporary pieces. Some of the selections included: Somewhere Over the Rainbow - The Wizard of Oz, Moonlight Sonata - Beethoven, Carol of the Bells, and A Whole New World - Aladdin.

There was a lot of action building up to the performance. Besides finding all the costumes and fitting the kids, I had to coordinate helpers, set up the stage, create a picture board, make snacks, prepare a slide show, and coordinate group practices. Normally individual lessons take place after school each day, but the week before the performance all of the students stayed after school every day for group practices. It was a bit chaotic at first, trying to pull all the acts together, but at last I could see the big picture. On the Friday before the performance we had dress rehearsal. This was really fun for me (and the kids) because we could at last see all of our hard work coming together. It was also really exciting to see the songs put together with hair, makeup and costumes!

The excitement of the kids was clearly building, both for the performers and for the other kids at CSC.  This recital was a bit different than other recitals, because it did not include every child at CSC.  The performers were each given 3 invitations to pass out to friends, so that in the end there would be a total of 25 children, along with house parents, teachers, counselors, staff and other outside guests (making the total around 80). The kids at the shelter could not wait to see what we had in store for them!

The day of the recital finally arrived, and the performers headed up to school around 3 for some last minute notes. At about 4:00 we started doing hair and makeup (without lipstick), because at 5:00 we had 2 3-foot pizzas delivered for dinner. No I am not joking, these pizzas were 3 feet in diameter!! It was crazy! After chowing down, we finally got everyone into their costumes in time to go out to the music room for warm ups before the show. The kids expressed that they were nervous, but very excited. After a short prayer we headed out to start the show. 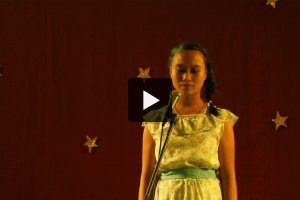 Everything about the recital went just as I had planned - maybe even better! The kids really came through in their performances, and truly showcased how hard they had been working in the past 4 months.  It was exciting to see the performances come to life as the kids added their actions and personalities to the songs. I was particularly impressed by one of my student's performance. All throughout practicing and lessons she had quite a hard time learning and memorizing the words to her songs. Even all the way up to the day of the performance I was worried that she would not have the confidence to sing her songs completely.  I had been working with her so hard on building her confidence in herself, so despite my worries, was feeling hopeful for her performance. Boy was I surprised what she would bring to the floor!  Not only did she say the words better than she ever had in practice, she had strength in her voice and sang with confidence and accurate pitch! I felt so proud.

We ended the recital with our surprise number "Let it Go". Once we finished, I felt instantly relieved, and I know the kids did too. It was a complete success, and I have never been more proud of my students!