Wishing away the years

I overheard a conversation the other day while waiting for a friend to arrive to lunch. Near my table two guys, apparent former coworkers, bumped into each other.

It was odd. After exchanging greetings the one asked, "so, how long you got?" Hopefully my face didn't betray that I was eavesdropping, because I was confused enough by the question to let on. Were these guys prison inmates? It sounded like he was asking, "how long are you in for?"

It turns out he basically was. Both men were nearing retirement, and the crux of their conversation had to do with how much longer they had to work. They were counting down the years until they could quit.

I hope I don't ever have a job in which I wish away years of my life because of it. In college I had one that caused me to wish away days, and that was bad enough. On my way to work in the morning I'd look at the other side of the highway and daydream I could press fast-forward and automatically be on the other side heading home. It wasn't a very uplifting commute.

I'm not sure what line of work those guys in the restaurant were in, but I'd bet they weren't missionaries. I know several missionaries. They have really hard jobs--and there are certainly days they wish would end. They work tons of hours, live far from family, have to learn a culture and are constantly putting others ahead of themselves. But, wow, do they live lives of purpose. 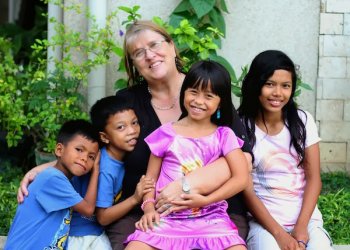 Are you wondering what you're going to do with your life? There are many good jobs out there, and many paths to take. Don't forget that missions is a valid one...including at the Children's Shelter of Cebu. We will have needs for teachers, administrators, coordinators and practitioners to work alongside our Filipino leaders in the coming years. I can promise it would be a challenge, and a career full of purpose.

If you think you might have what it takes to be a missionary, shoot me a line at cscusa@cscshelter.org. I'd love to chat with you.