Paul and Mitch in Tacloban

On Wednesday, February 5 Mitch and I flew to Tacloban, Leyte, to see Paul Varberg. Paul is a missionary with Converge BGC, and he has been doing relief work in that beleagured city for the past three months. It was three months ago that super typhoon Haiyan ravaged Tacloban, killing thousands and destroying or damaging many, if not most, of the houses.

After three months, much of the city is still in ruins. Most homes still have no electricity, as the power poles and lines are still down. Many businesses have not re-opened. Tents given by the United Nations have been set up all over the city for the homeless. Some families are trying to repair their roofs, but others don't have the money to buy the materials. In some cases, the needed materials are not available to buy. Whole communities were wiped out by the typhoon, swept away by the storm surge that noone saw coming. For Mitch and me, the destruction in Tacloban is hard to comprehend. Mitch commented to Paul Varberg that, if the storm had been just a few miles south, Cebu City would be like this.

It was encouraging to see Paul Varberg in action, and witness his concern for the people in his church who lost so much. CSC decided to partner with him in helping rebuild homes, from the donations that came to us for relief work. Our generous and faithful supporters have been able to contribute more than $15,000 to help Paul reach out to these families with wood, nails, roofing materials, cement blocks and cement. He is a man of integrity and it is a privilege to partner with him.

Here are some pictures from Tacloban. 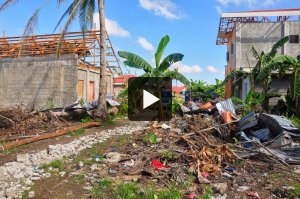