A Night to Remember

We all take turns being on duty on the evenings when the House Parents in each home have their day off.  It makes our already long day even longer but I have learned that I usually leave the home more refreshed and certainly more blessed than when I walked in a few hours earlier.

It was my night to be on duty at the Duterte Home.  All the little kids had gone upstairs to bed.  I gathered the older kids together to ask for prayer requests and to talk about things that they wanted to talk about.  The conversation quickly became about the recent typhoon.  The kids had heard stories from our workers and from friends at school regarding the death and/or destruction that the typhoon brought,  some of it not very far away.  The kids were unsure about their birth families experience in the typhoon as well.   Everyone just seemed to have a sad story to tell.  Jacob,  who is 27 years old,  wheel chair bound and unable to speak was in our group.  Jacob has Cerebral Palsy.  It was obvious that these stories were hard for Jacob to hear,  he was making sounds indicating distress and was getting more spastic as time went on.   I was afraid he was either going to break the bindings holding him in his wheel chair or break a bone!  I asked one of the workers to take Jacob to another room. I explained that we would ask Jacob to come back for our prayer time.  Jacob agreed.

For our prayer time I asked for volunteers for each of the people, families or circumstances that we had put on our prayer list.  When we got to one family that the kids had told about who had lost their home in the tsunami like storm surge that came with the arrival of the typhoon in a nearby town Jacob shouted and raised his hand in the air, he wanted to pray for that family.  His name went on the list.  We spent time in prayer,  it got quiet and Jacob had not prayed yet.  I looked up at Jacob and he was looking at me,  I just nodded, indicating that it was his time to pray.  He shut his eyes and he prayed.  A more beautiful prayer I have never heard.  As I watched and listened to Jacob pray I looked around at the other kids,  many of them were looking at Jacob too.  I was not the only one with tears in my eyes.  We could not understand one word that Jacob prayed,  we did did understand his emotion and we did understand "amen!"

Later, when all the kids were in their bedrooms I went to Jacob's room.  I thanked him for his prayer for the family and told him that I knew that God heard and understood every word he said.   I told Jacob that I thought that God was comforting the family right then because of Jacob's prayer.  Jacob got his big "Jacob smile" that takes up his whole face and even tends to make his body spastic...but he worked hard and brought his arm up in the air, got his pointer finger extended and with joy pointed straight up.  Yes Jacob,  God in Heaven heard and understood every word of your prayer!  I knew that is what  he was telling me, and I agreed.   I left for home with a smile on my face and an extra blessing in my heart.

I didn't have my camera with me that night.  This photo is a re-enactment of Jacob telling me exactly where his prayers go! 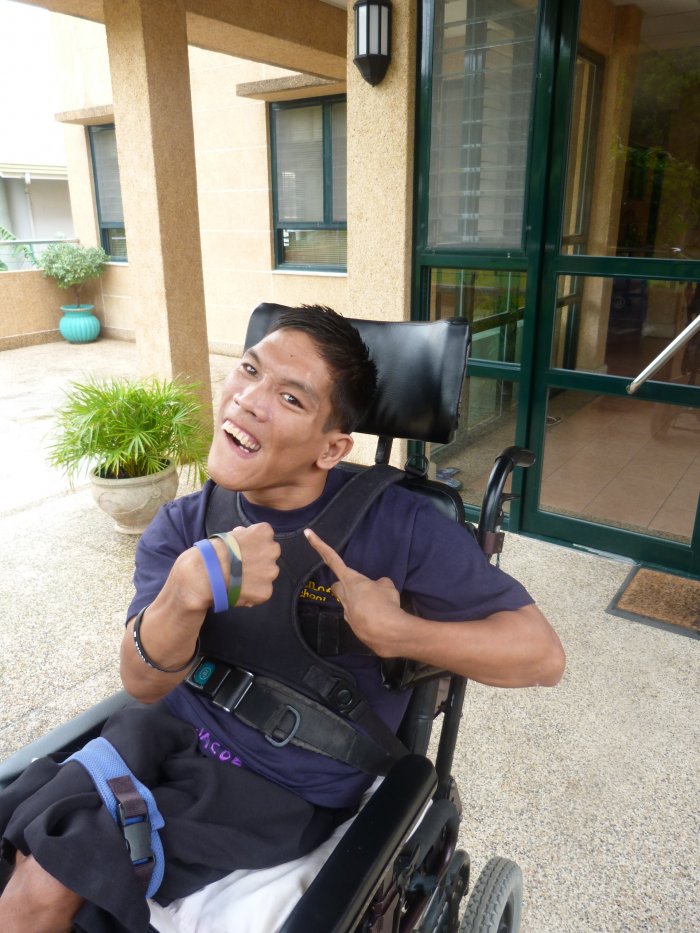