The day the earth shook...

It is no secret that there was an earthquake in the Philippines on Tuesday.  There has been a lot of information shared over facebook, some of it an hour by hour update on our experience.  Many people have spoken about the fear, the pain and the sadness they, or others they know, experienced.

It is a very unnerving feeling to have every surface you are touching rumble and move beneath and around you. There is nothing to grab onto, there is nothing that can steady you.  Also, the power shut off at the exact time the quaking began, so there is that shock to the senses.  And then there is the noise.  There is the rumble of the movement of the earth, some have described it like if a construction site were right outside your home.  Then there is the noise of your fragile possessions crashing to the ground and breaking or the stones of your house falling from above.  Scary.  And it seems to go on for so long.  Maybe because from the moment the shaking starts to when it stops you are unceasingly praying for it to end.  And then after the shaking stops, you begin to hear the shouts and cries of the people and the dogs.  In my neighborhood, the dogs had much to say.

You are really shaky yourself and you feel kind of weak, it takes a while to get your bearings.  I had heard from Sandy---she, Marlys and Jenny were okay.  I tried to reach Mitch, but there was no answer.  I then went outside to check on some of my neighbors---everyone in my compound was safe, Shari and Marcel too, which was wonderful!

I returned home to some disarray and with the strong desire to get up to the shelter.  My television had fallen from its stand and laid in pieces, a vase had met a similar demise.  I left them as is, moved any other breakable items to a safer place and headed out, unsure what state I would find things in as I drove.

People were everywhere in the streets, there was an accident at the base of the road the shelter is on, so people and vehicles filled the space.  I actually saw one of our house fathers there on his motorcycle.  He couldn't hear my shouting over the din of everything else.  I found out later that his wife, one of our house mothers, was out shopping with some of our older girls when the earthquake happened and he was going to locate them.  Terrifying.

I made it up the road easily and quickly.  The construction site next to our land even seemed to have made it through the quake alright.  I honked once outside our gate, the door opened and I pulled into safety.  I immediately saw Mitch's van and saw him walking around---all of us were safe and accounted for.

I was anxious to see how all of the kids were doing, so my heart was racing, but there was also just an overwhelming peace.  I could see the kids outside on the grounds, gathered together, many of them crying.  They ran and hugged me tightly.  I didn't have enough body to go around.  I moved around through the groups, checking them, checking for injuries, checking for tears, checking that they were okay.  All of our house parents were also safe and accounted for.  The house mother and the three girls who had been shopping during the quake had made it back safely---the girls were crying and one of them had lost her slippers in the panic---but they were back!

I stood in the middle of the yard and looked around and the buildings, the windows, the plants, the ground---everything looked as it had the day before---seemingly untouched by the 7.2 magnitude quake that had struck 20 minutes earlier.  Praise the Lord!

I have said this many times in my 2+ years at CSC, but since I first stepped foot inside the gate I have felt God's hand on this land, on this ministry, on these kids, on these workers, on us.  He always provides, He always protects, He always sustains.

The aftershocks continued the rest of the day, some feeling almost as strong as the earthquake, though they lasted less time.  We kept the kids outside for the morning until everything could be checked, but they napped inside in the afternoon.  For quite some time that day, every time an aftershock was felt the kids would run to the middle of the playground.

We had no power, so the generator ran all day, a noisy machine, but something we were grateful for.  We lost water for a period of time in the afternoon as the continuous running of the generator overwhelmed the water pump.  But that problem was solved quickly once it was understood.  The nurseries were moved to the living rooms in the homes and all of the children slept downstairs for that night.  The aftershocks continued through the night, the next day and the next and I am pretty sure I have felt some yet this morning.

While it remains a bit unnerving and you feel somewhat on edge---yesterday when I heard a loud rumbling noise, I looked for the nearest sturdy object to dive under should the shaking start, and it was really just a low-flying plane---there is no need to fear.  God is good, ALL THE TIME!  All the time, GOD IS GOOD! 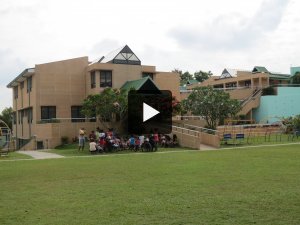